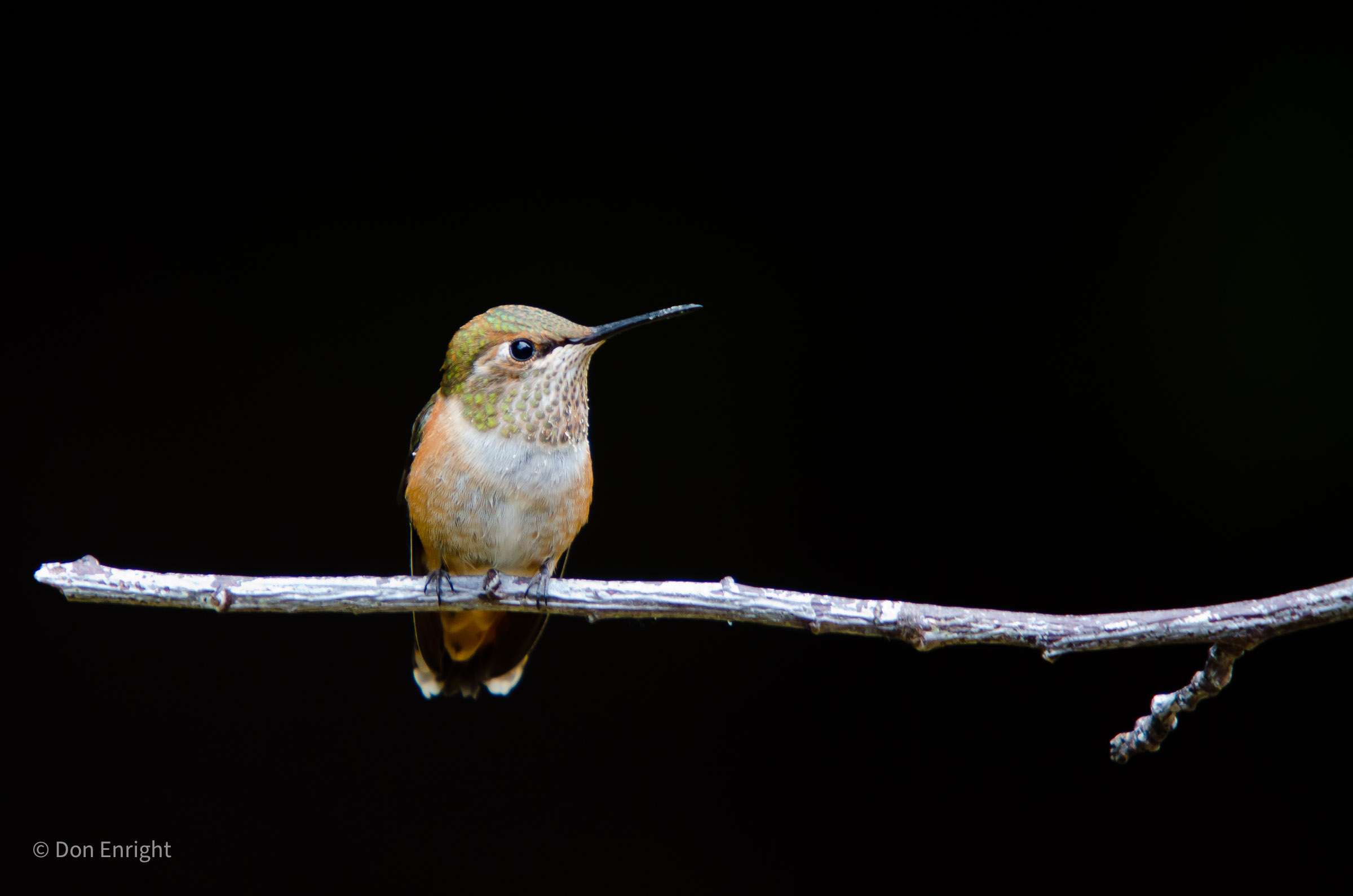 One of my favourite rituals of spring here in Vancouver’s famous Stanley Park is to seek out the very first flowers of the salmonberry. This native cousin of the raspberry is unmistakable in spring, with its big, downward-facing pink blooms on arching, shrubby stems. But I’m not just out looking for the flowers; my real quarry is a little harder to spot. Once I’ve found a good patch of blooms, I settle in and listen for quick, low humming sound whizzing by my ears. There! A rufous hummingbird, hovering for salmonberry nectar. The long, dark winter is over.

The rufous hummingbird spends its winter months in Mexico, making its way northward as spring approaches. That’s an awfully long haul for such a tiny bird. In fact, if you measure in body lengths, the rufous hummingbird has the longest migration in the bird world. Which leads one to ask, why bother? Why give up a Mexican holiday for the perils of a long, difficult voyage northward? Well, it takes a lot of resources to raise a brood of young, and in the tropics, there just isn’t enough productive territory to go around. Here in Stanley Park, however, there are flowers and insects aplenty… once spring arrives. A migratory lifestyle allows the best of both worlds.

Migration is all about the timing.

Having two homes, however, comes at a cost. And to survive a long and dangerous migration, timing is everything. One doesn’t want to arrive too early; lack of blooming flowers (not to mention freezing spring temperatures) can be fatal. On the other hand, the more hesitant types may find all the good territories snapped up by the time they arrive. So there is strong pressure on the birds to time their arrival with the earliest of the nectar flowers in bloom. Around here, those are the salmonberries. Red-flowering currants are another early-season staple.

Nowadays, mind you, a walk around the West End reveals dozens of exotic flowers that bloom before the salmonberries. Are the hummingbirds arriving earlier to take advantage of them? Well, not the rufous, at any rate. That niche seems to have been filled by the Anna’s hummingbird, originally a bird of the south-western US that has established itself here in BC over the last fifty years. The Anna’s don’t migrate at all, relying completely on garden flowers and nectar feeders to fuel them through the long winter.

Call them old-fashioned, but the rufous hummingbirds still keep to their traditional calendar, honed by trial and error over the millennia. And that schedule doesn’t let them tarry here in Stanley Park, either. Once mating season is over (for the males, that’s mid-June), it’s time to take off to greener pastures. Or rather, pastures filled with the reds, yellows, and violets of wildflowers in bloom. Our Stanley Park hummers head eastward, to take advantage of the later-blooming alpine meadows of the Rockies. The females follow the males as soon as their two chicks are independent, and by August, very few remain here.

Smarter than you think

Common wisdom has it that hummingbirds home in on the colour red. Indeed, I have intentionally worn a red cap or jacket while hiking, to entice these little jewels closer. But while they do buzz in for a quick inspection, you can’t fool them for long. Birds with such stringent energetic requirements can’t afford to waste time, and recent research into rufous hummingbird feeding habits indicates they have a lot more going on in their miniscule brains than was previously suspected.

Not just a sucker for red

First of all, they’re not as mindlessly attracted to scarlet as they seem; hummers quickly learn which colours are profitable at any given point in the season, and will quickly shift their focus from red to orange to yellow flowers as necessary. Even more surprisingly, they possess an ability to remember which flowers, among the hundreds they visit within their hard-won territories each day, are productive at any given moment of the day. An ingenious experiment with wild hummers in southwestern Alberta demonstrated that they quickly learn, and memorize, the nectar-replenishing schedules of individual flowers, indicating a level of episodic memory that has rarely been demonstrated in the animal world.

Much of what we know of hummingbird migration comes from banding studies. (How do you band a hummingbird, you ask? Very, very carefully.) Bands recovered in places like Colorado indicate that our Vancouver birds head south on the eastern side of the great divide, making for a giant circuit, sort of a great annual tour of the wildflowers of western North America.

Those same banding studies (and bird surveys such as those done by our citizen scientists here in Stanley Park) indicate that this magnificent little bird is currently in decline, though it is still officially considered a species of least concern. Breeding bird surveys from 1980 to 2004 are alarming: British Columbia may be losing its rufous hummingbirds at a rate of 2-3% annually, though more data are needed. Reasons for the decline are sadly unclear.

What wildlife needs most of all, though, is habitat, and here in greater Vancouver, wild spaces can be hard to come by. Which is why the salmonberries of Stanley Park can be such a rewarding thing to see in springtime, for humans and hummingbirds alike.